TIME FOR PAUSE | NO FEAR!

CLICK TO DOWNLOAD
a PDF of ALL Goyim Gazettes for Desktops,
15″ or Larger Laptops and Printing at home/biz.

Welcome to GG #666!  If you’ve wondered how to easily and best prime someone with the truth about the jewish deception, this is it!  Atheists, agnostics and folks from all religions alike will find interest and revelations in the facts herein which have been intentionally withheld by earths’ oldest race for millennia.  GG readers know Confusion, Division & Fear are the key states of mind required to oppress the masses.  Each part will be clearly demonstrated herein with yet another smoking gun of irrefutable proof we’ve all been lied to our entire lives by Masonic jews and their synagogue of satan, or “SS”.  Ask yourself, how many zillions of times have they used religion and their media to subject you to the idea that 666 was evil?  Well, get ready to embrace the fact that 666 is all about the creator God and our world!  IT’S DIVINE!  Rev 13:18  “This calls for wisdom.  If anyone has insight, let him calculate the number of the beast, for it is a man’s number.  His number is 666”

EVIL 666
NUMBER OF THE BEAST

The “Golden Ratio” is a math term describing a ratio of 1 to 1.618 commonly found in all of creation.  Here’s a visual; 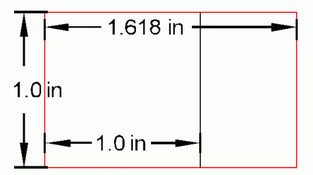 Start with one rectangle, drawn to a ratio of 1 to 1.618.  If you draw a line inside it to form 1 perfect square, the remaining rectangle will have the same ratio as the outer one.  You can keep doing it over and over, downwards to upwards to infinity. 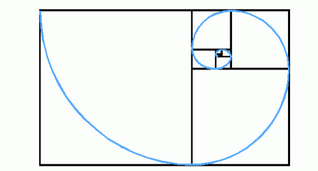 Look at the spiral shape formed by following the line to the opposite corner of each square as it goes clockwise:  Art using this ratio is the most pleasing to the eye because it’s found throughout nature in flowers, fruits, veggies, pine cones and even the human face, hand, body etc.  It’s everywhere and always makes a “six”.

As all GG readers are aware, EVERYTHING IS A LIE and the idea that 666 is evil is just another example.   666 is DIVINE!!!  We’re just going to take a look at all the beautiful 6’s in our world they have withheld knowledge about so we couldn’t unite behind one nature, one world and one wondrous thing we all have in common with YHWH our Creator.  We’ve all been robbed of this amazing proof of the handy work while being treated as Goyim pawns and servants.  The idea that 666 is evil began with twisting Rev 13:18 to make it seem that only one entity, the beast is 666 when in fact it speaks of 2 entities, the beast and a man who will be given ownership of 666 by our Creator Who Loves 666!  We go really deep into the exploration of this reality in issue #119 so there’s no sense in trying to duplicate things here. But basically, everyones’ knee jerk reaction to 666 is to think it’s evil because that’s what Hollywoods’ satanic jews have told us all by associating it that way in tons of movies and music they put out. 666 is the # of the beast!!! Really? Nah, it’s all just more satanic jew BS designed to avert us from the most sacred knowledge on earth.  In #119 you’ll see 6, 66 and 666 turns up in all kinds of cool stuff.  So many times you will wholeheartedly agree it’s not a coincidence, nor did it ever have anything to do with evil.  We’re only scratching the surface of a completely different reality with this issue but that said, we think any GG is worth more than all the jew published books you’ve ever read.  Here’s a few pictures of Gods’ 6s for starters;

Hooha!  Having fun yet?  Don’t you wish you would have been taught all of this in school, that God and ancients loved 6s?  It’s as if jews are trying to match God and nature or something isn’t it?  The ancients who made our time, alphabet and numbering systems knew all about this amazing peculiarity.  Do you think our satanic leaders know about it? Or would they just lie like rugs some more and have us believe it’s all a giant coincidence?  WE’RE ONTO SOMETHING HERE!!!

We’ve discovered the number 6 has been used against us in our menial slave work with feet and yards, our time with minutes, hours and days at work and now for the costs of our goods as seen on the barcode.  UPC (Universal Product Code) barcodes really do include the 666 bars as shown below.  In “Bar Code Speak” the number 6 is displayed by two bars of unique width and spacing, Hey that’s an 11!  Well of course it is and 666 is 11-11-11!  As with all UPC codes, the “11s” which make 6s can also be inverted as 2 white lines with 3 black spaces (bar code scanners don’t care).  So, everything we buy is evil.  There goes jewish spawned consumerism!  (At least that makes tons of sense).  Satanic jews have had all kinds of fun at our expense. 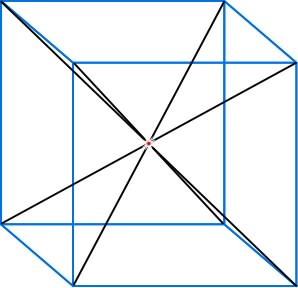 Again, recall the cube worshipping on the back of #112?  There are 6 directions in our 3 dimensional world beginning  with North, East, West & South (NEWS)  plus up and down.  The cube holds 6 perfect pyramids (the same as the star of David) with the base of each facing these directions and the points converging at center of the infinitesimal.

There’s a lot of other interesting things this author has found including the fact that David Allender = 666 in Gematria!  (More on that in #119)  We could go on for some time in this manner, but in the spirit of simplicity we’ll end this part with a few more examples of how the creator loves 6s.  This time in the form of six sided/parted objects like the “HEX”-agon which the Star of David fits in.  Also note how 6 circles fit absolutely perfectly within it; 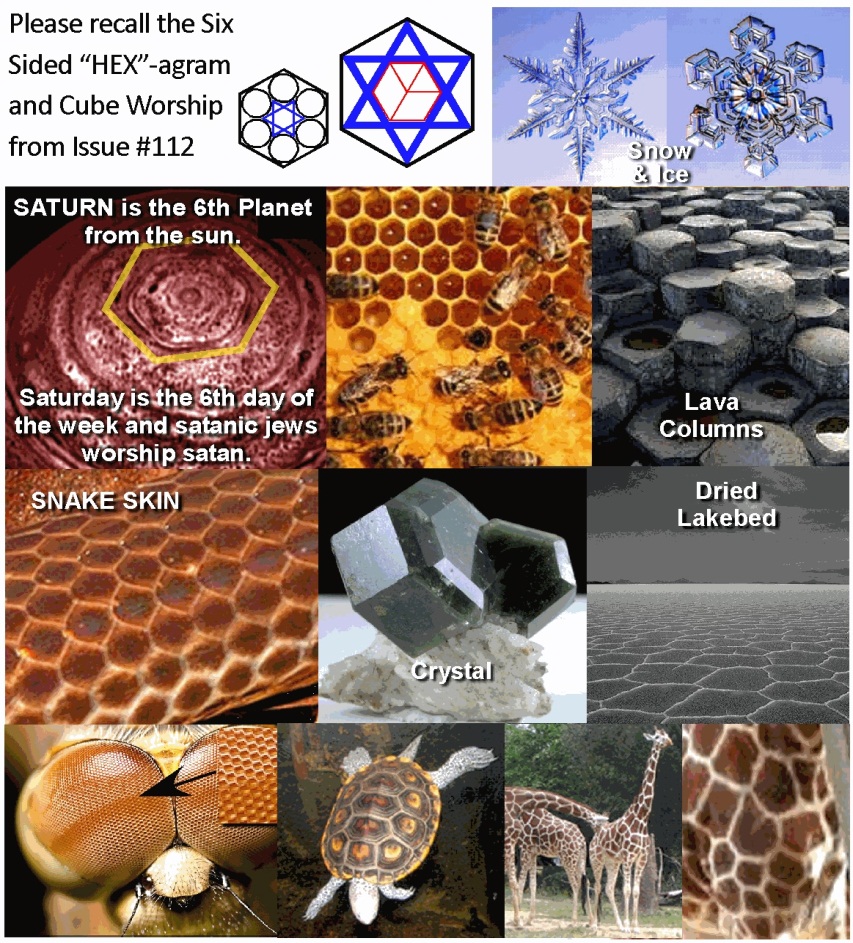 The bottom line is we’ve calculated the Number of the Beast and found that sixes and the most important multiples thereof are used everywhere in our world in obviously predominant manners.  This is absolute, irrefutable proof we have all been totally lied to by the same satanic jew pukes that told us things like disease, hunger, war and financial collapses were all just matters of happenstance.  Can you say “Bullshit”, NICE AND LOUD!!!  Also, these amazing and unexpected discoveries provide clear evidence for wonderment of why He Who Made our Sun, Earth and Moon exacted all the relative sizes positions and speeds to revolve around sixes.  As quoted in the header of this issues tab “Numbers Don’t Lie”, we can trust this info because it’s straight up numerical facts and provides overly apparent proof that God Who obviously made and positioned everything in our lives, loves 6s!  That’s a pretty big discovery wouldn’t you agree?  666 is a divine number and we’ve all been conditioned to think it’s evil!  Yea, how’s that for another totally classic satanic mind f**k?  Considering that you now have absolute proof of a “conspiracy” in that 666 has been used to slap us all in the face and make us look like idiots by murderous, lying, criminally psychopathic satanic jews. Once again we must ask; do you agree it’s time for justice?

Note to commenters; WordPress is a little archaic in some aspects such as posting pictures. You can only put one per post, it goes at the bottom of your comment and large sizes flow off the page. So, if you’ve got a good post and would like to add more pics, simply email the comment and them to; david@boxzero.com so we can post it for you. Also, Peggy and I are trying to make sure this is high quality commentary for archival on the GG Data DVD so, we’ll do basic spelling and grammar checks and perform corrections where needed. Thanks in advance for YOUR comments and thoughts!

(No we’re not worried about giving out our address or contact info. People have forgotten that EVERYONES’ names, numbers and home addresses used to be listed in phonebooks. The reason that changed is due to satanic fear mongering propaganda created to make sure We the People are disconnected from, and distrusting of, one and other. Get it? Stop playing into the hands of our evil system and stop being part of the problem! Provide your phone # at minimum as much as possible online! And most importantly, realize that God protects His people, if you’re a believer then why would you doubt that? It only shows a lack of faith and you don’t want that, God sees all!)

You can also use the following form but be aware that if you’re commonly censored like us, WordPress won’t let your message get through. (Everyones’ email addresses are linked to them in a NSA/CIA/Mossad database, this is how they know who to dissallow.)

You May Be Wasting Precious Time.

We (David & Peggy) Now Know There Are Only;

You Will Ever Need To Truly Succeed!